Skip to navigation Skip to content
Skip to Sub-menu

Alumnus Frederick Grier is an Associate at UHA London, where he is currently leading the design team on a 76 meter (250 foot) office tower in Kazakhstan. The team includes engineers in Germany, Moscow and Kazakhstan as well as London. His professional portfolio also includes a convention center in the Middle East, several residential and office towers throughout Asia (China and India) and a social housing project in Croatia. He is currently the President-elect of the AIA United Kingdom Chapter.

After graduating from the University of Missouri, Fred studied at Taliesin – the Frank Lloyd Wright School of Architecture, and received an MArch at IIT in Chicago. He worked for several Chicago based firms including Murphy/Jahn (now JAHN) before moving to London in 2013. He holds an architecture license from Illinois. 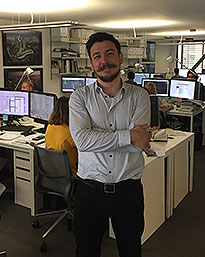 What helped you from MU’s Architectural Studies?

“When I first enrolled at Mizzou, I had no idea where life would take me. I was born on a rural Missouri farm; I didn’t know what architects did, but I knew that farming wasn’t for me. The Architectural Studies degree program offered a way to blend my passion for artistic expression with my talents in math and science. The HES faculty challenged me intellectually and opened my eyes to the importance of the built environment, textiles, and design. With opportunities to get involved more deeply within the College of HES (with groups such as HES ambassadors and student council), groups across campus, and even study programs outside of Missouri, Mizzou provided me with a terrific launch pad into the exciting world of architecture. Even today I wonder where life will take me next.”