Skip to navigation Skip to content
Skip to Sub-menu

Goal is to help people with disabilities live life to fullest 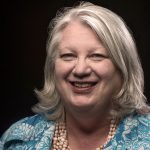 Julie Brinkhoff, business services consultant senior with the University of Missouri, is an expert in disability regulations and compliance.

Brinkhoff is the director of the Great Plains ADA Center where she has served in various roles since the mid-90s. The Great Plains ADA Center is part of the Architectural Studies Department, which carries out a federal grant to maintain one of several regional ADA Centers that provides technical assistance to businesses and other entities across the U.S. The goal is to help individuals, state and local governments, and businesses implement or comply with Americans with Disabilities Act (ADA) requirements.

“The Great Plains ADA Center is a regional technical assistance center for the ADA,” Brinkhoff says. “There are only 10 of these centers in the United States. So, staffing an ADA Center is kind of a unique role because there aren’t that many people doing this.” The centers fall under the umbrella of NIDILRR, or the National Institute on Disability, Independent Living, and Rehabilitation Research, which is part of the U.S. Department of Health and Human Services.

“People with disabilities have rights and protections under the ADA, which became law in 1990, that they did not have before,” says Brinkhoff. “The information about ADA rights and protections is out there, but you don’t really want to hand employers or businesses the Title I guidelines for employment provisions and say, ‘here do this.’ We take information, like court cases, settlement agreements, and other guidance and put it into a format that is usable for people. We also want to make sure that individuals with disabilities know what their rights and responsibilities are under the ADA.”

The regional centers provide technical assistance and training on the ADA across the United States, with the Great Plains ADA Center covering Iowa, Kansas, Missouri, and Nebraska. Each region has a website to disseminate information. In addition, they develop products to assist with their goals. The different regions for the most part work independently from the other. Still, they do join together to help leverage staff and knowledge, as well as participate in some national projects.

One such project is the ADA Coordinator Training Certificate Program, which helps ADA coordinators, who organize and implement ADA compliance activities. “We have 3,000 members in that program right now,” Brinkhoff says. Another joint project is the National ADA Symposium, which is a conference that brings attorneys, those with disabilities, architects, health care providers, advocates, and others together to enrich understanding of ADA implementation.

“It is both a profession and a mission in my life because I’ve been doing this for so long,” says Brinkhoff. “I enjoy helping the disability community at large – the business community, and state and local governments – implement the ADA.”

The five-year $5 million grant is competitive, and therefore every half decade the university must recompete for it. The University of Missouri has been awarded the grant during each grant competition. The staff of the Great Plains ADA Center takes the lead in writing the grant and Brinkhoff has been involved in writing the 100-page grant application for the last several grant cycles. “I would say it’s more in-depth and more difficult than some other types of grants. It’s quite a process and has many components similar to a business plan.”

1. Know and understand ADA: Title I (employment), Title II (state and local government), Title III (business), focusing on the rights and responsibilities of each.

2. Use a variety of approaches to get the word about ADA out to all who need to know it, be it websites, training, working with disability groups and advocates …. Put into action what she is trained to do – in other words translating knowledge.

4. Collaborate with other entities throughout the region with different entities by leveraging partnerships.

“We have gotten to the point where we are not just providing information about what compliance obligations are, but we also talk about best practices, the ‘here’s how to do things even better.’ And that’s been really rewarding.

“The Department of Architectural Studies at MU is a great fit for us because the Center does a lot of training on the ‘accessibility of the built environment,’” she says.

Brinkhoff adds those with disabilities need not only access to buildings, but also communication needs within that building. They need sidewalks to be able to get into buildings and have the ability to transport themselves around while inside. Deaf and blind people have other needs.

“Being with architectural studies really made sense because we have a very good relationship within the region with code officials and the architectural community. And that’s probably one of our niche areas, accessible facilities, although we are moving a bit more into recreation. The goal of the ADA is inclusion in life without barriers.”

Brinkhoff, a Mizzou alumna with a master’s degree in student services, says because of her role in the Great Plains ADA Center, she has learned to be very objective. “We serve a wide range of consumers and entities and one of my responsibilities as director of the Great Plains Center is to make sure our services and information are unbiased and clearly reflect current interpretation of the law and guidelines. We also take confidentiality of people seeking technical assistance very seriously.

“Our vision, in terms of the spirit of ADA, which is a civil rights law, is to make sure that people with disabilities have the same rights as anybody else in society. I can see real changes that have happened because of the Americans with Disabilities Act.”